Hence, again,
Rind, be gone.
Here, in the wedding hall of neutrality,
Glowing with shyness,
Asadal and Asanyeo
Shall stand and bow at each other
With their chests and privates exposed

Rind, be gone.
From Mount Halla to Baekdu
Leaving only the fragrant bosom of earth,
All the pieces of iron, be gone. 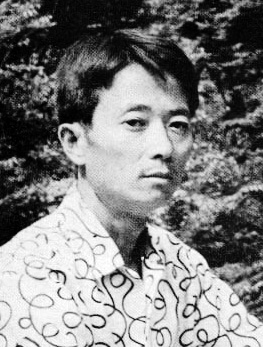 This link also includes an alternate translation of the poem. I personally find this translation too liberal, as the translation completely ignores denotational meaning in some lines and includes lines that are not mentioned in the original poem. It seems like the translator was trying to make it easier for the readers to digest the poem. I would not say this is a wrong translation, however, since this is a matter of what you value the most in translating literary works. I personally try not to alter the intention of a poet as much as possible, while keeping the poem comprehensible to readers. There may be some lingering question marks, but trying to answer them is itself an attempt to understand the particular poet and the literary tradition in which the poem was written.

Read other poems by Shin Dong-yup:

Source of the photo