A Poem That is Written Easily

The night rain whispers outside the window.
The six-tatami room is a stranger’s country.

Though I know the fate a poet is doleful,
Shall I craft a line of poem?

After receiving tuition in an envelope
Where scent of sweat and love are snugly cradled,
I head to a lecture of an old professor,
With a college notebook under my arm.

When I think about it, after losing
One, two, and all of my friends from childhood,

For what
Do I merely sink to water, alone?

It is a shameful thing.
That a poem is written so easily
When life is hard to live.

The six-tatami room is a stranger’s country
While the night rain whispers outside the window,

The ultimate I drive out a little darkness by lighting a lamp
And wait for the morning that will arrive like the new era.

I am the first handshake that stretches a small hand
and grabs myself with tears and consolation. 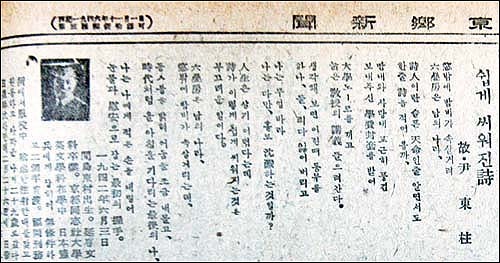 First thing first. ‘적은’ in the penultimate line usually means two things: small in quantity or to write. So to translate ‘적은 손’ as “a small hand” may sound counter-intuitive. However, when I checked several different commentaries, they all interpreted it as “a small hand”. Some anthologies these days even change ‘적은’ to ‘작은’ (meaning small in size) and publish. I’m not sure if this is coming from difference between older Korean and contemporary Korean, but I guess that’s what it is.

Secondly, tatami is a Japanese style mat used in rooms, and the word “tatami” is also used to measure the size of a room in Japan. It’s usually translated as “mat” when it’s used as a measurement unit, but I used the word “tatami” to make the context of the poem clearer.

Now, last but not least: You might have noticed I changed the order of lines very frequently here, if you can read Korean. Doesn’t this contradict what I said last time, how I try my best to keep the original order of lines and line breaks as much as possible (as long as it doesn’t sound unnatural in English)? Well, unlike the last poem, this poem puts less emphasis on lyricalness of the poem. What is essential in this poem is the narration. So, I decided to take a route that can preserve the poem’s narrativity as much as possible. I think what features of a poem to sacrifice depends on each poem and poet, so I will adjust my standards every time I translate each poem.

Yun is one of the most (if not the most) appreciated poets in modern Korean literature. He’s also one of my favorites. I’m hoping to post more of his poems through the Korean textbook translation project and whatnot.